Although the tools available in Revit make it very difficult to get even remotely close to the prototypical Hauer panel like in the photo below without spending an inordinate amount of time, we can still explore some of the ideas. Addition, subtraction, perceived connections, pattern, foreground, background, and opportunities for the play of light make the latest renditions of this exploration the closest in theory. 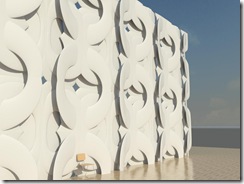 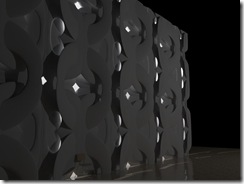 The "night" shot allows for the visualization of how the interior light bleeds through. 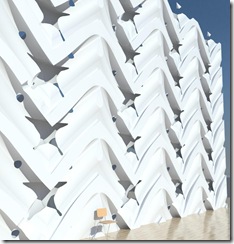 This would be the closest to the theory of Hauer's panels in my opinion. Void sweeps are the method of construction for this panel. The tiling method used is also much simpler than the first and makes for a continuity of form that the first did not have. 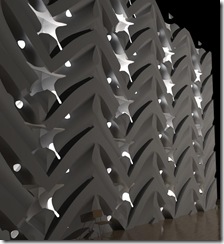 Greater shadow and light areas show clearly here. I think by far the most successful yet for the pay of light. 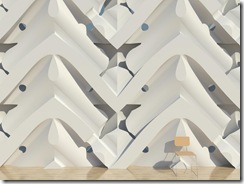 Close-up(the chair is for scale)

I recently attended a panel discussion at Siggraph 2008, where Enrique Rosado discussed his work with Viennese Sculptor Erwin Hauer. Hauer explored continuous perforated modular structures that as architectural panels, expanded into infinite surfaces with escher-esque qualities. Inspired by the idea of these panelized systems,  I made a first attempt at one as a Revit Curtain wall panel. From the rendered image, you can see the joins relatively clearly, but it has potential. By using the swept blend tool I came close to having a continuous weave. The negative space in my rendition needs to be expanded and the line at which they join to the next needs to be more fluid. With experimentation, the panelization is very dramatic. 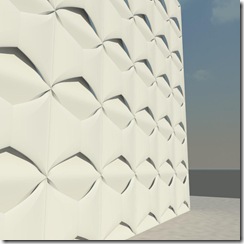 The negative space in the panel creates an unclosed form, allowing light to pass through and space for shadows to play. 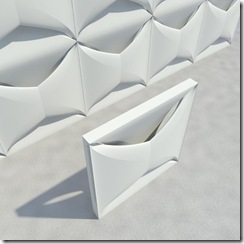 Below is one of Hauer and Rosado's panels on display at Siggraph. They clearly have mastered the art form.

The modern equivalent of the above is the mathematically based fractal sculptures, also on exhibit at Siggraph, below. I'd like to see that done in Revit. No, really. Doesn't Autodesk have one of the geniuses behind Generative Components on staff now? Generative procedures in Revit are limited and difficult to use effectively in my opinion. A full featured generative feature in Revit would be a powerful addition the tool. A third party tool that could import into Revit with parametric and/or structural information would be useful too. That's enough rambling for today.

A couple more shots of my little playtime panels: 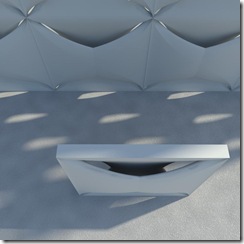 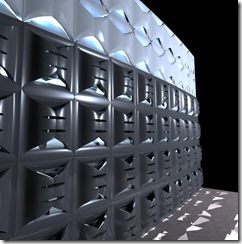 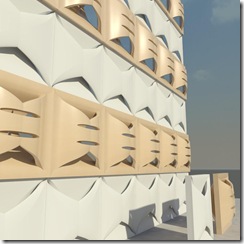 One Step further into the Future

This is not a Revit related post, at least not yet, but I felt it drives home a point, which is that our future as Architects and Designers will be very different to what we have known for the past 20 to 5000 years+/-.

The rate of change in the tools we use is accelerating and the current methods of designing and documenting a design through the disconnection of a mouse may well change back to a much more active, interactive and immersive method. I say change 'back' because many of us learned Architecture when the pencil and ink were still commonly used in documentation; a method where one's whole body was enlisted.

Obscura's Visionaire, (the first video below) an adaptation of haptic interface technology, is another amazing development in the burgeoning user interface revolution. I'm sure most of you will agree that this technology doesn't lend itself well to measured documentation, or even measured Building Information Modeling, yet. Imagine standing all day long as you dance around your van-sized monitor, designing and building your model! We would get a great workout at work! But in the next 5-15 years some talented software/hardware developer will redefine the methods with which we design.

Posted by craig barbieri at 7:35 AM No comments: