Minneapolis, MN - This year's ACADIA conference [Association for Computer Aided Design in Architecture]  was titled "Silicon & Skin" and had a theme of bio-mimicry or studying natural systems to inform an architecture. These complex designs are achieved through a process or processes of generative design. Generating an Architecture by means of modular systems created and modified by factors of interest is a hot topic in design. Technological advances [both hardware and software] have made possible the deep exploration of architectural theories in this area of focus. The most commonly used software tools used for generative design are

Other tools used for generative purposes at this conference were developed by Architectural firms and Universities in-house. Scripting is the buzz-word of this genre of Architectural designers. Along side these tools are mathematical tools to understand and develop algorithms and mathematics behind form. All of these are used to explore and design systems that create environments.

Rhino3D with the Grasshopper plugin is the most recently developed generative tool currently offered free by McNeel. A huge benefit of this tool for a cutting-edge design firm is the ease of getting Rhino-Grasshopper generated geometry into Revit Architecture for BIM documentation. See this post for a demo. The results of the Grasshopper plug-in are as responsive and as complex as you can imagine.

The Generative Components class was a three day course and the results of the course were markedly different as you can see from the images to the above left. GC has on it's side the benefits of it's engineering background but the results after a 3 day long workshop left a lot to be desired for the quick creation of an Architectural form. From my vantage point the potential is great if time is not a critical factor. Several of the papers and presentations used GC as the foundation tool. I was amazed at the number of design iterations and explorations many of these GC designers performed over a period of months to get the results that they did. I later found that most of those who presented were academic faculty and had the benefit of their classes as their work horse(s). With this experience I come to the conclusion that GC has great capability when partnered with a team of talented mathematicians and scriptors, but is not well suited to a large firm with tight budgets and schedules. I have not yet explored the porting of GC-generated designs to the Revit platform but as of yet haven't seen a simple demonstration like that of designreform.net, taking the geometry into a true BIM platform such as Revit. In discussions with a representative of GC's creator, the interoperability with the preeminent BIM platform falls short of possible. This is a very bad strategy on their part in my opinion.
GC has been the most popular and trendy tool for generating design and has influenced the world of digital architectural theory into a module-focused fetish. There were a number of presentations at this conference that looked at very small modular relationships based on organic systems that they carried through to develop a "occupiable space". Whether or not the creations were build-able in a practical sense or not remains questionable.

Of the three applications, Grasshopper currently has the most generative potential for Architects. While Revit is capable as a generative modeler, it is not as easy to develop comparable responsive geometries as in Grasshopper. GC is seemingly the most comprehensive generative tool but it's complexity, plethora of required applications, learning curve, and archaic user interface keeps it from reaching its potential as a practical tool for architectural firms at the cutting edge.

What was missing from this conference was Catia, Geomagic, Gehry Technologies Digital Project and Autodesk Inventor and Maya, among others. These tools clearly belong in the tool-belt of the modern techno-savvy Architect, but were neglected by the majority of the iphone-toting black-garbed trend-induced "Architects" Architects speaking at this conference. Feel free to leave comments ;)

As described earlier, the title of this conference was "Silicon & Skin", representing a theme of studying natural systems to inform an architecture. Biological inspiration and technological implementation is a technique that has been used for thousands of years, but never referring to the scale to which we do today. An example of how applicable the theme may be is the eye of a Fly which is remarkably similar to a geodesic dome. Another example is that of the surface tension of a bubble and the Chinese National Aquatics Center. Both lending themselves to both Architectural design and structure. These are simple and literal examples. More profound examples of natural systems the warrant architectural exploration are those of the capabilities of natural system, such as drag reduction(shark skin) adhesion(penguin feather) Mass transfer (stomata cells in plant leaves(trees can move water up 100meters without a pump) or pores in insect exoskeleton), transparency( collagen fibres in cornea). Such natural systems have the potential to inspire profound architecture.

In general the conference was a valuable experience and one that refreshingly woke the slumbering academic in me. It has been a long time since I took a temporal section through a dynamic system or discussed the intricacies of a chreod. The keynote speakers were inspirational and the presentations of the various academics and practitioners verified my assumptions of generative architectures as being of the now. Those who generate design base on rules they set or systems they are inspired by are the Architects of the current and next generation. This generative technology will develop further, become easier, grow in capability and practicality. Those large firms that can harness it's potential now will make a name for themselves in the design community.

How does a large firm harness the potential of this generative wave? At the conference several representatives of different firms spoke of their "Specialist Groups". A number of large and medium sized firms have established a specialist design group that is comprised of talented young designers who are capable in scripting, advanced 3D generation, modeling, writing their own software, etc. These groups are used by designers and project teams to create and develop challenging designs and establish the methods of development and documentation. Foster and Partners calls theirs the SMG or Specialist Modeling Group and SOM calls theirs the "Black Box Studio". This is something similar to what I heard about RTKL's "Studio X" yet as I understand it, this group was specifically a Revit specialist group. From their appearances and excitement at the conference, the representatives of these specialist groups were fervent about what they did and loved an impossible challenge. They are the type that work on similar problems for fun and develop robust software tools when a need is recognized or proposed. The formation of one of these groups are one way of pushing practice technology in the direction your firm wants to go. Is it the only way? No. The number of free software tools and freelance programmers and avenues for such work in today's market makes it practical to hire out development if you don't have a team in-house. The marketability of having a team in-house is another story...

3D printers are currently being used in architectural design workflows and their use is growing significantly. Case Study: Foster & Partners purchased their first 3D printer in 2005 placing it on their design floor and incorporating it into their workflow. Initially they created about 4 models per week. This number has increased significantly to where Brady Peters of F&P proclaimed they have two currently running 24 hours per day. Each project currently has at any stage in it's development an array of 3D printed design iterations.  These printers are located on their design studio floor. In a Revit-based workflow the use of one these devices is a big step in the direction of advanced design. Revit can export directly to an STL file for printing and though I have not yet tested the process yet, I look forward to in the coming weeks.

Hi Folks! It's past midnight and you are catching me blogging again. I'm a little overdue for a post but you know that when duty calls, blogging stalls. Generative design is a hot topic these days and so is complex architectural geometry. I hear from a number of people in my firm that it is too difficult or impossible to create organic complex geometries in Revit. Do you hear this too? Well don't worry, complex geometry in Revit2009 is a very real and possible and I find it relatively easy. Call me lucky.

There are two main methods of creating complex forms in Revit.

The example below is a super-quick one to show the kinds of complex geometries possible and show that is isn't a simple surface model but a full Building Information Model. Note that when working with forms such as this, as with most applications, the curvature and complexity can begin  to weigh-down your model file quickly so a higher-end workstation such as an animator's will prove valuable. 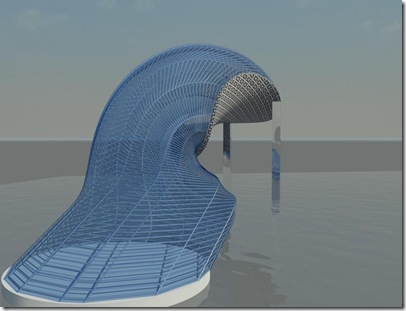 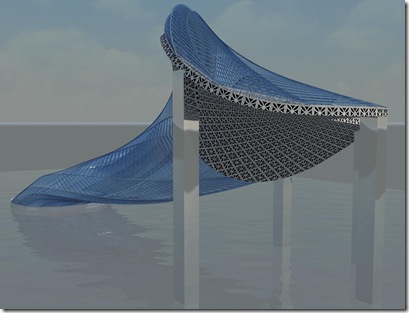 Posted by craig barbieri at 1:15 AM 4 comments: