ACADIA 09 and Grasshopper to Revit

The ACADIA conference begins tomorrow. The advanced digital design tool workshops preceding the conference end today. Several of the workshops were cancelled including the ones I had registered for but a colleague of mine participated in the Rhino Grasshopper workshop which I am now regretting not signing up for as the results were impressive. Rhino plays nice with Revit. Grasshopper is a plugin if you weren’t aware and it has matured a bit since last year’s ACADIA. It is similar to Generative Components in many ways but the interface is far more useable and the community that is forming behind it is can’t be compared. 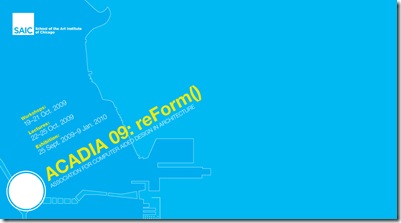 KlingStubbins will be using Rhino as a result of this workshop and incorporating it into the Revit workflow in our offices where possible. The link between Rhino and Revit remains critical in Architectural design firms as Revit is the BIM platform of choice by up to 98% of firms in various adoption statistics. As always and with any application, there are certain limitations and/or best practices when interfacing another application with Revit and it is never as simple as one would hope. That being said, the flexibility of Rhino allows for a pretty tight fit in my opinion. I haven’t mentioned the Concept design environment in Revit yet. It is a good tool and I look forward to the release and update of Revit 2011 (or the subscription pack this year) where it may be enhanced. Much of what you can do in Grasshopper can be achieved in Revit CDE but the interface of the former allows for a much more efficient workflow for design. Will we see slide controls for parameters in Revit? Time will tell.

Posted by craig barbieri at 4:09 PM No comments: